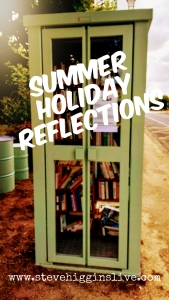 I know I’ve waxed lyrical about lying on a sun lounger but another favourite pastime of mine on my French holidays is just sitting outside of an evening and watching the sun go down, a glass of wine not too far away of course. As the sun dips down over the horizon it’s time for the local bats to make an appearance and whip across the patio whizzing from the trees to I don’t know where but making a fleeting but strong impression on my mind.

The pool is all covered up and the barbecue cools quietly in the corner as I take a sip of my red wine. All is well in the world. Well, it was, a few days ago when I wrote that, now it’s just another holiday memory.

The last few days of a holiday are always the worst, a countdown to packing up and getting ready to leave, checking what time the ferry sails and considering which route to take to the port, what time to leave and so on.

After a pleasant trip to Caen we boarded our ferry, had some food and settled down in our cabin for a nap before the long drive up north in England.

Leaving Portsmouth we headed to Southampton and then north on the A34 dual carriageway. Leaving the port was a little like a grand prix start as various vehicles of all shapes and sizes passed through the passport checks and then sprinted away to the motorway. A large contingent of that traffic made their way up the A34 and up ahead of me as well as behind were a great number of cars. The A34 is an unlit dual carriageway and we all motored along at a good pace, 65 to 70 mph. After a while the traffic thinned out and up ahead of me were two pilots or pathfinders, lighting up the dark road ahead. Gradually, one pilot turned off leaving just one car ahead, then he turned off too and it was just me, leading the pack. Now being in front on a dark unfamiliar road at night is not so easy. There was plenty of traffic on the other side so use of my full beam headlights was limited and gradually my pace slowed a little.

Once someone behind decided to take a look at taking the lead but once off my tail in the outside lane he slowed right down and I overtook him back and once again I took on the pathfinder role. Later a guy doing well in excess of 80 came hurtling past, lit up the road for me but then disappeared over the horizon but after a while another vehicle came to the front, overtook and upped the pace a little and we carried on as before, my pathfinder lighting up the road for me.

Personally, I think that unlit motorways and A roads in the UK are an unnecessary hazard and I honestly think that perhaps Highways England would be better spending their money on street lighting rather than so-called Smart Motorways. However, the journey home was a good one, the rain held off and road closures were few. We motored up north serenely taking in the M40, the M42, the M6, the M55 and finally home. There were a number of mandatory 50 mph sections on the M6 due to roadworks but in a way they were helpful, almost like the safety car in a Grand Prix when, on a long journey, the driver can relax, check engine temperatures and oil pressure and so on before resuming 70 mph again.

Back in 1977, the year in which Floating in Space is set, there was a long row of telephone boxes just by Piccadilly gardens in Manchester. Telephone boxes were once everywhere but today, when the mobile phone is the main instrument of communication, telephone boxes are few and far between.

In a small village in France, we came across this once lonely and unused telephone box, now transformed into a small library. Take away a new book to read but remember to leave your old ones behind for other phone callers  -sorry, readers- to use.

One of my objectives on this holiday was of course to produce more writing and push one or more of my numerous writing projects towards completion. As you may have guessed if you have ever read any of my other post-holiday posts, that goal was not met although I did manage to knock out my usual Saturday posts whilst I was away and stack up a few draft posts into the bargain. My one deadline, that of a Saturday morning at 10:00 AM UK time is really what motivates me and keeps me going. Pity I don’t have a similar deadline for my books!

I am always wary of blogs that give tips for writing or blogging. They ask you to subscribe and then hit you with a full blogging/writing course with a bargain price tag thrown in towards the end of their patter. One great writing blog that I do enjoy is one by Kristen Lamb and one post that pinged into my inbox the other day was this one:

One of the tips for writing when you get stuck was this, instead of writing so much then flipping back and forth changing and editing, try writing a fast draft. Yes, head down, laptop open and just steam ahead. No stopping to check or to edit or to rearrange. Full speed ahead, nail that draft and then look back, rearrange things and edit. Great idea, I just need to get into full steam ahead mode first. Of course one thing is worth remembering:

No unfinished-but-perfect book has ever hit the New York Times best-seller list, but a lot of crappy finished ones have.

Last year I remember reading about Noel Coward, either in his autobiography or some other biography. Coward spent a lot of his time in the winter months at his house ‘Firefly’ in Jamaica. There, Coward would go to his study at 8 AM and write through the morning until 12 when he would join his friends for a swim and then lunch. Ian Fleming had a house nearby, ‘Goldeneye’ where he wrote many of the James Bond books.

Perhaps that’s the answer to my writing issues! I need to spend the winter in Jamaica!

Steve Higgins is the author of Floating in Space, a novel set in Manchester, 1977. Click the links at the top of the page to buy or for more information!