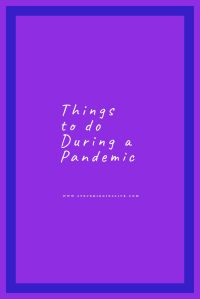 I’m pretty much of a stay at home sort of guy normally although I do like to go out now and again. I do love dining out for instance. However, staying  at home day after day may stop the corona virus spreading but it can get a little boring. What can we do to entertain ourselves then?

Well first of all the weather in the UK is pretty nice so why not get the deckchair out and have a read of a good book? The obvious one for me to recommend is of course Floating in Space but I’m trying not to make this post into a plug for my book, although if you fancy getting a copy, click here!

The Murders at White House Farm.

Recently I’ve been reading a great book called The Murders at White House Farm by Carol Ann Lee. The book was made into a TV drama series not long ago which I thought was really interesting and that made me buy the book. In case you’re not familar with the story, back in 1985 Jeremy Bamber called the police to say he had received a telephone call from his father to say that his sister, staying at his father’s White House Farm had gone berserk with a gun. He didn’t call 999 but called his local police station directly. He and the police went to the farm and after waiting for a firearms squad, they broke into the house -locked from the inside- to find Bamber’s mother and father, sister Sheila and her two young sons, all dead from gunshot wounds. Sheila was suffering from schizophenia and the immediate assumption was that she had murdered her family and then turned her father’s rifle on herself.

Some officers weren’t so sure about that scenario and a number of things didn’t add up. For instance a struggle had ensued between the killer and Jeremy Bamber’s father Neville, so how did the 27 year old daughter manage to overcome the bigger and stronger Neville? Sheila shot herself after the murders but there were two shots to her head. How could she then shoot herself a second time? Blood was all over the master bedroom where Neville and his wife June were first shot yet Sheila’s feet were clean and free from bloodstains. Some officers and family members were concerned at Jeremy’s lack of emotion and his plans to sell off and convert into cash his parents’ assets. 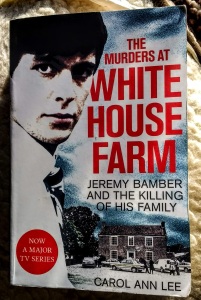 Later Julie, Jeremy’s girlfriend came forward to reveal Jeremy had told her of his plans to murder the family. Her story though had a number of flaws; in particular she claimed Jeremy had used Matthew McDonald, a friend, as a hitman for a fee of £2000. McDonald had an alibi for the night and vigorously denied any involvement in the murder.

When the case came to court Bamber was found guilty and sentenced to life imprisonment. This was a fascinating read but I found myself confused about some elements of the case. The author focusses on many aspects in detail but is a little unclear on others. The really strange thing is that Jeremy Bamber was convicted without any forensic evidence showing him to be the murderer. There was no evidence showing him to have been present that night, in fact he was seen leaving for home after working on the farm that day but he supposedly returned on a bicycle to do the murders. Again, there was no proof of that. He was found guilty only by his ex-girlfriend’s testimony which I find a little scary. Maybe he did it, but then again, maybe he didn’t.

Of course, in a situation like the corona virus lockdown the TV comes into its own. We need entertaining but also, we need information. Information about what to do and how to keep ourselves safe during the crisis. The other day we downloaded Rocketman, the film about Elton John for viewing when we get bored with the usual TV output but so far we haven’t got around to watching it. We have watched Flesh and Blood on the ITV hub. In case you didn’t see it, Flesh and Blood “is the modern story of three adult siblings – Helen, Jake and Natalie – who are thrown into disarray when their recently widowed mother Vivien declares she’s in love with a new man,” according to ITV.

“This is no ordinary relationship drama, as someone in the family will be dead by the end of the story – but the question of who dies and who is the killer keeps us guessing right up to the last moment,” the channel added. I found it really good and I look forward to seeing series 2. 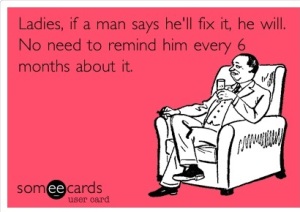 Jobs around the House

There’s a joke I’ve seen on facebook a number of times. It’s the one where the guy says ‘If a man says he’ll fix it, no need to remind him about it every 6 months’. Anyway, recently during the lockdown I’ve repaired the garden gate, fixed the leaky gutter and given the lawn it’s first 2020 mowing.

I read somewhere that during the plague in Elizabethan times, Shakespeare’s Globe theatre was closed down just like other places of entertainment. People at the time had no idea how the bubonic plague was transmitted so the authorities of the day banned mass gatherings, just like 2020 in fact. Between 1603 and 1613, the Globe and other London theatres were closed for 78 months according to an article in the Guardian. Plague was an ever present threat for Shakespeare and other actors and performers of the day and in fact, there is some evidence to show that King Lear was written during a plague outbreak in London in 1606. Everywhere was quarantined so Shakespeare clearly thought, might as well get down to it and write something new!

I had the same thought and maybe by the end of this outbreak I might even have completed something new. Well, one or two pages anyway.

6 responses to “Things to do during a Pandemic”