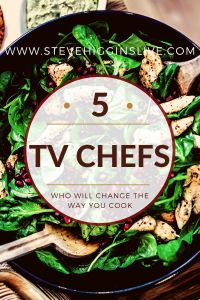 I do like my food. Like everyone I have my likes and dislikes, for instance, I’m not a great lover of fish although I’ve been known to eat cod, hake, calamari and even mussels. Good food though is more than just ingredients or produce and a good chef is in his own way as much of an artist as a great painter or a poet. I do love watching great TV cookery shows and although I am not a great cook, I have sometimes tried to follow the advice of various TV cooks who have inspired me to make something exciting. The results will not be spoken about here but getting back to those TV chefs, who is your favourite?

A few years back when I first lived on my own, I saw one of Ken’s TV shows and began to wonder if I could actually make some tasty Chinese food. I remember going down to the Chinese supermarket in Manchester and picking up various things like sesame oil, lemongrass and of course, my first wok. Chinese cooking is quick and fresh and most of the work is in the preparation because the actual stir frying is a pretty quick process.

I followed all of Ken’s instructions and seasoned my wok and now and again I manage to dish out some reasonable food. I couldn’t quite find the clip of Ken Hom that I wanted to show but below is a recent clip with Ken talking about his food.

While I’m on the subject, wonder what I did with my wok?

One of my favourite cuisines is Italian. Some people say pasta is boring but I’ve never really felt that at all. I love pasta, especially spaghetti and my favourite pasta dish is a very simple one spaghetti aglio olio e peperoncino. It’s basically spaghetti with garlic, olive oil and chilli. Simple and tasty and it’s always handy to have some fresh bread nearby to mop up the olive oil. Antonio Carlucci, who sadly died in 2017, made a great series back in the eighties and one of the highlights was where he visited some small Italian village and the locals showed him their authentic versions of pasta or how they made a ragu for instance. I’ve always liked simple rustic cooking and I think that is what is at the heart of Antonio’s food.

If I remember correctly that ragu was something involving tomatoes, onions and garlic, all of my favourite ingredients. I couldn’t find a clip from it on YouTube so here’s one of Antonio in his later years.

Jamie Oliver is a very modern cook and he seems to cultivate a sort of Jack the lad streetwise fast-talking persona but he really is a great modern chef. In his many TV shows he caters for the modern household where people come home from work after a busy day and inspires them to cook some simple and fresh food instead of just shoving a frozen pizza in the oven.

Jamie made his TV debut in 1999. He was spotted by a TV producer making a documentary about the River Cafe where he was working at the time. His TV show the Naked Chef followed soon after and his cookbook from the series was a best seller. I’ve got quite a few of his cookbooks in my collection which I always refer to when I get down to some serious cookery.

Here’s one of his many YouTube videos showing how to make another of my favourite Italian dishes, Bolognese.

Keith Floyd is the master of the TV cookery programme and his shows from the seventies and eighties were the forerunners of some of today’s TV cookery shows. Floyd visited lots of places, soaked up the local atmosphere, checked out the local dishes and produce and then turned up somewhere, a village square, a beach or even a local restaurant and started cooking. During each monologue to the camera, Keith made sure the cameraman filmed exactly what he wanted him to film, giving a running commentary on the ingredients and the cooking process as well as directions to the cameraman. The supping of wine during the cooking was clearly compulsory. His shows were a mix of travelogue and cooking visiting various far flung places and his impact on the genre is still visible in today’s food programming.

Rick is a direct link to Floyd in many ways. Rick’s first appearance on TV was when Floyd visited his famous fish restaurant in Padstow and later when Floyd’s producer wanted to work with someone new, Rick turned out to be the obvious choice. Rick, together with producer David Pritchard produced a series called Ocean Odyssey which was a big hit and the two went on to make more foodie programmes together. A recent series and one of my favourites was Rick Stein’s Long Weekends. Incidentally, a while back I reviewed Ricks autobiography which is well worth a read if you ever see it on the bookshelves.

I had always thought that Graham Kerr, AKA the Galloping Gourmet was Australian but a quick check over on Wikipedia showed me I was wrong. Kerr was born in London to Scottish parents who were hoteliers and later Kerr moved to New Zealand where he became a culinary advisor to the New Zealand Air Force.

In New Zealand Keith appeared in a highly successful cookery show called Entertaining with Kerr. Later the show moved to Australia and later still Graham and his wife Treena made the move to Canada. There Graham began a new cookery show produced by Treena called the Galloping Gourmet which again was very successful. The title came from Kerr’s fast moving and enthusiastic style in which he literally galloped into the studio.

The format of the show was a film travelogue followed by Graham cooking a dish inspired by his travels live in the studio. I remember watching his shows as a child where he would taste the dish and then give the camera a look of food rapture before running into the audience and grabbing someone to taste his food. I loved it and it’s always been one of my foodie favourites.

5 responses to “5 TV Chefs Who Will Change the Way You Cook!”