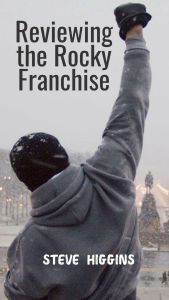 I’ve always liked the original Rocky film but something more interesting than the film itself is the story of how it came to be made. In the mid-seventies Sylvester Stallone was a bit part actor with few acting credits to his name. One day in 1975 he watched the Ali v Chuck Wepner fight in which Wepner lost but managed to stay 15 rounds with heavyweight champion Muhammad Ali. Stallone, inspired by the bout, wrote a screenplay about a washed-up fighter called Rocky who manages to stay the distance with the world champion. He passed the screenplay to his agents who took it to various producers. The screenplay was good and many producers were interested but Stallone attached one small condition to the sale, that he himself had to play the part of Rocky.

The producers who finally picked up the screenplay were Winkler-Chartoff productions. They had a contract with United Artists but UA still wanted a big name star in the title role. Burt Reynolds and James Caan were suggested but Stallone hung on and continued to insist that he played Rocky. I have always thought that Stallone was offered a million dollars to let James Caan play Rocky but according to an article I read which quoted Stallone himself, the offer went up to $340,000 and he still said no. Eventually the producers gave in and Sylvester Stallone received just $35,000 for acting and writing the screenplay plus a percentage of the profits. United Artists had a major production in the pipeline at the time, New York, New York, a big budget musical and they felt that the profits from that film would cover any losses on Rocky. In fact, the musical was a flop and those losses were covered by the success of Rocky.

The basic plot of Rocky is that World Champion Apollo Creed, played by Carl Weathers and based loosely on Muhammed Ali, is let down after planning a title bout to be held during the US Bicentennial celebrations. His opponent backs out and no other contender is available. Creed decides to rescue the fight by selecting an unknown boxer for the hugely publicised event. He chooses Rocky Balboa, a part time boxer and debt collector. The problem is, Creed thinks it will just be a demonstration match but Rocky thinks he can win.

The film was a low budget production but is still a great looking film. It was one of the first films to be shot with a Steadicam, a revolutionary camera mounting which absorbs movement. It was used in the fight scenes and the scene in which Rocky runs through the market in Philadelphia. In a sequence filmed at a skating rink, the producers had no money for any extras so they changed the script. Instead of skating with extras, Rocky and his girl Adrian bribe the cleaning staff to let them in when the rink has closed and is empty.

Joe Frazier makes a cameo appearance in the film and in fact some aspects of his life were used on the film as part of Rocky’s training regimen, running up the steps of the Philadelphia Museum of Art and punching the meat carcass in a freezer.

Rocky was released in 1976 and grossed over $5 million in the first weekend of its national release and a later box office of 225 million dollars worldwide. The film was nominated for various awards and won the Oscar for Best Picture. Stallone’s pay packet has increased with each subsequent instalment of the film franchise but even today he still isn’t happy that the producers, rather than Stallone himself, own the rights to the Rocky character.

Given the huge success of the original there was really no doubt there would be a sequel. The film starts just where the last one left off except in the original the two fighters agree that there will not be a rematch. In this sequel, Apollo Creed does a quick reversal and is immediately on at Rocky about a rematch. Rocky is not sure what to do with his new found celebrity or with his money. He buys a house and a new car. He tries his hand at TV advertising but when that fails he sinks deeper into debt and begins to consider fighting again. His manager played again by Burgess Meredith is against the idea but when Apollo ups his campaign to get Rocky to fight and publicly insults Rocky, he finally comes on board. Adrian isn’t keen on the idea and Rocky trains in a lacklustre fashion until she gives him her blessing.

The title bout begins and at the end the two fighters knock each other down together but it is Rocky who gets up to claim the win.

Stallone asked to direct the film and when John G Avildsen, the director of the original film was unavailable, he got his chance.

I’ve seen this film before and always thought that in a way it was just a remake of the original. I watched it again for this blog and rather enjoyed it.

Rocky is doing well as the heavyweight world champion. He is settled with Adrian and has a son. He takes on various contenders but is constantly hassled by Clubber Lang, played by Mr T, for a title shot. Rocky agrees to meet Clubber in the ring but his manager Mickey, played by Burgess Meredith, is not so keen. On the night of the match Mickey dies of a heart attack and Rocky loses to Clubber. Apollo Creed decides to help Rocky and takes over his training for the rematch. After a tough match he wins back his title and the film finishes with Rocky and Apollo getting together in the ring for a friendly and private bout.

Stallone wrote the screenplay and directed the film and the theme song, Eye of the Tiger won an academy award.

I had not seen this before but watched it last week and thought it was pretty good.

Can’t say I was totally impressed with this film. Apollo Creed decides to make his comeback with a fight against Russian Boxer Ivan Drago played by Dolph Lundgren. Creed is badly beaten by the Russian and dies from his injuries. Rocky agrees to fight Drago in Russia and takes a predictable win. It was again written and directed by Stallone and he and Lundgren traded real punches in the filming which ended up with Stallone in intensive care. Stallone’s future wife Brigitte Nielson played Drago’s wife, Ludmilla. Bill Conti who wrote the musical score for all the other Rocky films was absent from this one and instead Vince DiCola produced the disappointing music.

In 2021 Stallone released a new version of the film and the re-edited and re-released film was titled Rocky Vs Drago. The new version is only slightly longer but apparently was meant to add more depth to the relationship between Rocky and Apollo Creed as well as cutting some sillier elements like the robot Rocky gives to Paulie as a gift. A review I read in the Guardian felt that Stallone only marginally succeeded.

This is probably the low point in the franchise. Original director John G Avildsen returned to the director’s chair and Stallone intended it to be the last in the Rocky franchise but it’s possible that because it was badly received, he went on to make Rocky Balboa.

Rocky returns from Russia but retires from boxing due to an injury. He then finds that his brother-in-law Paulie has given power of attorney to Rocky’s accountant who has then gone on to squander Rocky’s fortune. Rocky and his wife have to sell their home to pay their debts but Rocky finds purpose in training a young fighter. The relationship later sours and the two engage in a street fight which Rocky wins.

I have to admit that this is one Rocky film that has eluded me so far. Over on Rotten Tomatoes the review went like this: “Rocky V’s attempts to recapture the original’s working-class grit are as transparently phony as each of the thuddingly obvious plot developments in a misguided instalment that sent the franchise flailing into long term limbo.”

Verdict: Rotten Tomatoes gave the film only a 29% approval rating.

I have two of the Rocky films on DVD. One is the original Rocky and the other is this one, Rocky Balboa. It’s a really thoughtful entry into the Rocky franchise. Rocky has retired. His wife has died and he has lost a lot of his money. His income comes from a small Italian restaurant in which many of the patrons come not just for Italian food but also to meet the former heavyweight champion of the world, Rocky Balboa.

The current champion Mason ‘the line’ Dixon has been criticised for fighting easy opponents. To get some positive publicity, he decides to enter into a computer fight with Rocky. It’s a fight reminiscent of the encounter between Rocky Marciano and Muhammad Ali in the 1970’s. At the time Marciano and Ali were the sport’s only two unbeaten champions. They were filmed sparring for various rounds and the result decided by probability formulas entered into a computer. Two different outcomes were filmed, the version shown in the UK showed Ali winning which my father was not happy about as he loved boxing and was a particular fan of Rocky Marciano.

In the film Rocky is judged to have won the computer fight and so decides to renew his boxing licence. Mason, not happy about being beaten, challenges Rocky to an exhibition fight which both men want to win. Mason emerges as the winner but Rocky doesn’t seem to mind. His day is over and he receives a standing ovation from the crowd.

This was probably the very best entry into the Rocky series. Rather than just boxing, the film looks at Rocky himself as he gets older, mourns the loss of his wife, and worries about his relationship with his son. He revisits many of the locations in the original Rocky film including his old house and the pet store where he met his wife. The only problem I had with the film was that the actor playing Mason Dixon didn’t look much like a heavyweight boxer to me. Surprise, surprise, then when I found out that actor Antonio Tarver was in fact a former light heavyweight champion! Ah, not a proper heavyweight then.

Rocky Balboa was the last in the Rocky series although a spin off series began in 2015 with Creed in which Rocky mentors boxer Adonis Johnson, the son of Apollo Creed. Although Stallone apparently contributed to the story, he did not write or direct either this or the following films. He isn’t happy about the producers owning the rights to characters he created either and publicly tweeted his unhappiness about a reported spin off film about Drago, the Russian boxer in Rocky IV.

In a lot of ways, the Rocky films parallel Stallone’s own life. He turned down big money offers to let others play what was the role of a lifetime, took it on himself and was propelled to film stardom.

2 responses to “Reviewing the Rocky Franchise”