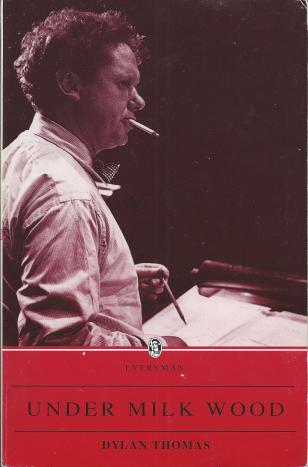 I love lots of writers but probably my all-time favourite is Dylan Thomas. I love the outstanding power of his writing, his incredible imagery, and the wonderful pictures he creates with his words.

Dylan also is the sort of writer I’ve always wanted to be: A bohemian, pub crawling, boozing writer who fought with himself as he laboured to paint his word pictures. Whether that was really the case I don’t know but Dylan did like his pubs and he did enjoy a drink.

The fact of the matter is that I’m nothing like Dylan, except we both share a love of words, particularly the sound of words, which is the key to the richness of Dylan’s work, especially his poetry. If you think about it, there must be a connection between the sound of a word and its meaning, a deep organic connection. After all, how did words begin? Imagine some ancient caveman, just wanting to get some concept over to his mate. What are the deepest and strongest feelings for a human being? Well, for a caveman food must be one, and love too. Surely love was present in those primordial days when every caveman went out on Saturday with his club looking for his mate. There must have been a moment when ancient man strived to say something to his mate, tried to express his feeling and a sound that was the precursor to the word love slipped uneasily from his lips.

27th October this year is the centenary of Dylan’s birth and I’m sure Wales and Great Britain itself won’t let the occasion pass without celebrations of some sort. If you have read any of Dylan’s poems and are yet to understand his magic, let me give you a tiny bit of advice: Listen to Dylan’s voice. Yes, Dylan, like many poets wrote for his own voice and if you click on to any Dylan Thomas page or search anywhere on the internet you are bound to come across some old recording of his voice. Don’t make do with lesser voices, even when we are talking about great actors like Richard Burton or Anthony Hopkins. Search out Dylan himself and you will be won over, like me, by the power of his voice.

It’s not just his poems that are rich with the power of words. Dylan wrote and performed a good many radio plays and broadcasts and my very favourite is ‘Return Journey.’ It’s about Dylan himself returning to Swansea in search of his former self ‘Young Thomas.’ He visits young Thomas’ old haunts and meets with people who knew him fleetingly; like the barmaid who used to serve him, journalists who worked with him and even the park keeper where Dylan and his young friends would play in the park. It’s a lovely piece where drama merges with prose and we slip in and out of the two as the story progresses.

Many years ago I visited Dylan’s former home in Laugharne, now a museum dedicated to Dylan. I can only say I loved the place and didn’t want to leave. I wandered through its rooms and looked at the black and white photos on the walls and tried to imagine Dylan living here and banging out his poems and stories in his writing shed then later ambling down to the pub for a pint. I had to leave early the day I visited so I went back the next day and the staff recognised me and let me in without paying so in return I bought some books about Dylan and a copy of his collected stories.

At least I can say that in the mustardseed sun, I visited his house on stilts, high among beaks and palavers of birds . .

If you liked this post why not buy my book? Click the icon below! Want to know more about Floating In Space? Visit my video page!