There is nothing more pleasurable, certainly to me, than messing about, not in boats but in a second hand book shop. I do love flicking through the old and worn books on the shelves and if you persevere and have patience you will always find at least one book worthy of your attention. Here are two of my finds, one new and one old.

Michael Powell: a life in the movies.

Michael Powell is perhaps not a name that leaps out at you but he was a movie director who made movies in partnership with screenwriter Emeric Pressburger. His most famous film is probably ‘A Matter of Life and Death’, a movie starring David Niven and Kim Hunter. Niven plays a pilot who miraculously survives certain death in plane crash returning from a bombing mission in World War 2 Germany. He is then visited by a conductor from the next world, advising that his survival is a mistake and he should be dead and he now must be prepared to enter the next world. Niven decides this is not on at all as now he has fallen in love with Kim Hunter and he decides to appeal. This fantasy is interwoven with another explanation of his issue, that of a serious brain trauma that needs the help of a neurosurgeon. I loved that movie and you can see it for yourself as it’s regularly shown on British TV.
Powell and Pressburger made numerous movies together but hit a downturn in their fortunes when they made the controversial film ‘Peeping Tom’. The film was about a murderer who films the death of his victims and was not well received at the time.
Years later, directors like Martin Scorsese revived the film and praised it as a lost classic but at the time Powell and Pressburger’s career stalled fatally.
Powell’s autobiography is a wonderful read. His career as a film maker spanned some exciting times in the industry and the book is divided into three sections: Silent, Sound, and Colour. Not many directors can boast of covering a filmmaking span like that. The book is a wandering, meandering look at Powell’s life and career. It’s a rather disjointed read -Powell tends to go off at a tangent about various things- but somehow that seems to add to the enjoyment of the book rather than detract from it.

Little bit disappointed though to get to the end of this pretty hefty book to find that it’s only volume one! Better get back to the shop and see if they have volume two! 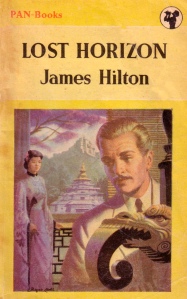 I picked up this wonderful gem of a book at charity shop years ago for the bargain price of twenty five pence and if I could convert the pleasure this book has given me into pounds, shillings, and pence, it would be a figure that far eclipses that initial outlay. James Hilton has become one of my favourite writers and one of my personal writing heroes. (Check out my blog about him here!) This highly original novel reflects the fear and sadness that many must have felt in the days prior to World War 2. There must have been a feeling then that with new technology the approaching conflict could be the end of civilisation.
In this wonderful book, a group of lamas in a monastery hidden from the world by a chance of geographical fate decide to look ahead and ensure that the riches of the world, not gold or silver, but literature, art and music, should be preserved should a holocaust engulf the world. To ensure that their creed of respect and compassion endures they select a British diplomat, Conway, to carry on their work and set about bringing him to Shangri-La. Shangri La is a small community in Tibet insulated from the world by mountains on all sides and the people here enjoy unheard of longevity.
Despite his capture Conway is taken into the confidence of the High Lama and given his task of continuing the community and its traditions but his fellow captives have differing ideas, especially Mallinson, his young vice-consul who is desperate to escape.
I won’t spoil things for you just in case you come across the book, or the outstanding 1937 movie directed by Frank Capra but I will say that this novel is one of my top ten books of all time, and one I return to time after time.

If you can’t get your hands on the two books above, why not try Floating In Space? Click the icon below!