Yes, this post is about me, because believe it or not, I am a self-published author. The digital world of the 21st century has given me a chance that was unheard of before now. In the pre-digital world, writers like me would be prostrating themselves before the publishers of the world, trying to get them to accept our offerings, publish them and pay us royalties. Now, even professional writers, not just lowly amateurs like myself, are turning to self-publishing. The digital age has turned the publishing world on its head.

Of course, publishing is one thing but then there’s another stage, something that a publisher would consider part of his job: Marketing. How do the book reading public know about our books? How do they know what is available, what to read, where and why to buy? Yes, marketing provides the answer. A book must be marketed, brought to the attention of the public and, using all the slippery tools of the marketeer, the public must be made to want the book, and then actually buy it!

Oops, yes, that was the copy that turned out too big!

I completed my book about a slice of 1970’s working class life some years ago. Three publishers had rejected it when I decided to self-publish. I was disheartened by those rejections I must admit, but in the world of publishing, twenty, thirty or more rejections for a new author are commonplace. I used Createspace and Kindle Direct Publishing, both part of the Amazon empire to platform my book. The paperback was produced using Createspace and the Kindle version with Kindle Direct.

Producing my book online was fairly simple but the process was one which actually underlined how much work was still required on my manuscript, which until then I had foolishly thought was complete. The first version for which I ordered a test copy was far too big, which I only realised once the finished product was in my hands. I ordered another version which again I wasn’t too happy with and after untold issues with fonts and formatting I finally produced a version that I thought was ready for the reading public. I explain things more in the video below;

I feel I now know something about writing a book but as for marketing, well, I’m just a beginner. I started this blog on wordpress for the prime reason of telling the public about my book but then immediately I was faced with a similar problem. How do I get the public to read my blog? It’s like one of those trick photographs you see, someone holding a picture of themselves and in the picture they are again holding a picture and it’s repeated into infinity. I had to create an Internet presence so I started selling myself on Google+, Facebook and particularly Twitter. I began a campaign of Tweeting; Tweeting my book, my posts, my photographs and my videos. I followed everyone who has followed me and gradually I have built up a pretty big following going from 90 followers to over 3000 in just over a year. That would be nice if all my followers bought my book, however, many are in a similar place to me, wanting to sell their book or video or music track or whatever, so not only are they not interested in Floating In Space, they see me as a potential customer of theirs!

Yes, the writer of the 21st century is free of the restrictions of previous times. He is not beholden to or waiting on the attentions of a potential publisher but he has his own set of unique problems: He must be not only be a writer but also a marketeer. And he needs to have some graphic design ability and perhaps some photographic and video skills too! On top of that, most of my videos are me talking to the camera so a degree of TV presenting skill must be thrown into the mix also!

Sometimes I think about those heady days some years ago when I decided to self publish. Yes, the lure of fame as a writer, the interviews I expected, the potential trappings of success. Yes, that spurred me on to take my unfinished novel that had lain unread and unnoticed on a collection of floppy disks for many a year. To take it and bring it back into the modern cyber world, to re-write it, update and finally finish it for all those hungry fans of kitchen sink working class drama. (Yes, where are you, hungry fans of kitchen sink drama?) 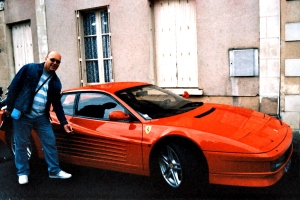 Whoops! Not quite ready to order that new motor!

Eventually of course, reality stuck its ugly size 12 boot in the door: My book isn’t yet a best seller. The TV channels are not begging for interviews. The megabucks are not rolling in: Not sure if the guys at Ferrari were too happy when I asked them to put on hold the order for a new Ferrari I had tentatively made. In fact, the meagre pittance I have spent on a few facebook and twitter ads has far outstripped my royalties from Amazon. Still, who knows, maybe the next youtube video will go viral. Some random BBC producer may notice my blog and read my book and think ‘hey, this would make a great TV film!’ (Just in case, I should mention here that I do have a ‘Floating In Space’ film script draft!)

Of course, all writers are dreamers, that is why we write but if you too have aspirations of publishing success, be prepared to wait a while!

If, after reading this post you feel the urge to read my book, click on the links at the top of the page for more information or click the icon below to visit my Amazon page!

2 responses to “Confessions of a Self Published Author!”