You might think that the lockdown is heaven sent for a writer. Stay at home and write stuff, perfect! After a few weeks though I have found not only have I not written much at all. Actually, I’ve been feeling a little bit bored, just like a great deal of the population I suppose.

One thing I have done is watch a great deal of TV although a lot of it has been disappointing. Back in the late 1960s one of my favourite TV shows was The Time Tunnel. It was an American sci-fi show produced by Irwin Allen who made The Towering Inferno and the Poseidon Adventure among other things and a few weeks back I was delighted to find that it was being re-shown on the Horror channel.

In The Time Tunnel two American scientists are ‘lost in the swirling maze of past and future ages, during the first experiments on America’s greatest and most secret project, the Time Tunnel. Tony Newman and Doug Phillips now tumble helplessly toward a new fantastic adventure, somewhere along the infinite corridors of time’ as the opening blurb used to go.

The Time Tunnel starts off with a Congressman coming to investigate the growing budget of the Time Tunnel Complex and threatens to close things down unless he sees results. Scientist Tony Newman decides he must therefore travel back in time to prove that the tunnel really works and save the project. Tony ends up on the ill-fated liner Titanic. His colleague Doug follows him back to 1912 and the control room struggle to shift the two in time before the ship sinks.

One episode that I particularly remember was when the pair land in Pearl Harbour, just before the Japanese attack in 1941. Tony meets himself as a young boy and finally solves the mystery of the disappearance of his father in the attack. That was one of the better ones.

Unable to return the duo to the present, the technicians back at Time Tunnel HQ struggle every week to shift the duo to somewhere new just in the nick of time. They never seem to manage to get the pair home as there is never enough power for this process despite a huge powerhouse courtesy of the special effects department which we see a glimpse of almost every week. The other thing is that if they did get back home, there’d be no show next week.

I did love this show as a 12 year old sci-fi fan but here in 2020 I seemed to be fast forwarding through all the boring bits, of which there were plenty. Some things don’t seem to stand the test of time and the big problem with the Time Tunnel is that the stories mostly weren’t good enough and many episodes seem to revolve around what appears to be stock footage that was filmed for some other project. I’m really cheesed off that I missed the Pearl Harbour episode though.

Coronation Street, like all the TV soaps is suffering because the lockdown has prevented further filming of the series. Instead of going out six times per week, we are now only getting three episodes to satisfy us and even those are looking like they are missing something. It looks to me like the current main storyline involving controlling husband Geoff and wife Yasmin has been the focus of the last filming sessions while some other content involving the minor storylines is missing. Last Wednesday’s episode seemed to have a slightly odd narrative flow, returning to the same scene when perhaps we should have cut to something else, the cafe or the Rover’s Return pub. Still, the editors can only work with the footage they have and sooner or later there will be nothing and our favourite soaps will be on hold until staff can return safely to work. I noticed also that TV quizzes like Tipping Point and Countdown are now just re runs of older episodes.

One other thing has made my life slightly more interesting during these slightly surreal times and that is Spotify. You might not have even heard of it but it’s a music app I’ve downloaded to my iPad. I thought originally that it was a way of downloading music. I’m not a great downloader but the previous place where I used to download music was the HMV digital site, 7Digital. It had, I first thought, gone to the heavenly resting place of defunct web sites but when I finally got connected once again after many years I found it not very interesting and so in my search for internet music I came across Spotify. Now with Spotify, you cannot actually download music, well actually you probably can if you pay for Spotify premium but as the cheapskate that you know I am, I’m happy just to listen to music. On Spotify you can set up favourites and playlists and here’s the really extraordinary thing, after a few days use Spotify starts to suggest things you might like, new music that is similar to music you have already played. Now, after only using it for a couple of weeks, I have built up some pretty substantial music playlists.

After finishing my last book, Michael Palin’s diaries, I looked around for something new to read and picked up three books. Bruce Forsyth’s autobiography, Khrushchev’s memoirs and a book of three Noel Coward plays. I’ve read the Noel Coward book before but the writer’s wit and humour never cease to amuse me. Blythe Spirit is one of Coward’s best known plays and was also made into an excellent film starring Rex Harrison. Having read that book before I tend to just flip through it and re read some of the best bits although in the end, I went through the entire book. 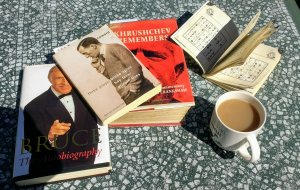 When Khrushchev’s memoirs become a little too serious and I fancy a change, something a little bit lighter, I turn to either Noel Coward or Bruce Forsyth. I picked up Bruce’s book at a church sale and although I didn’t expect much, it has been pretty interesting. Bruce was probably one of the last old time entertainers. He talks about the days of variety in the 1950’s and 60’s and about being in various shows and playing in theatres like the London Palladium and how he managed to break in to TV with Sunday Night at the Palladium which he compered for many years.

At one time he was travelling the country living in a caravan and performing in numerous shows. The latter part of the book is just an excuse to mention all his show biz chums and drop a lot of names but all in all, it was a good read. Bruce doesn’t tell us much about himself though, except in a chapter about his relationship with the UK press, where he proceeds to give the press a good telling off. Still, Bruce was a proper celebrity unlike some celebs these days who seem to make a career from being on TV reality shows.

The Khrushchev book is interesting but suffers like many books written in a foreign language by not reading quite as well as it should when translated into English. 20,000 Leagues under the Sea was another foreign language book I read a while ago but that was a new translation and actually read pretty well.

One brilliant foreign language book that comes to mind is Papillon by Henri Charrière. This, unlike the two books mentioned above is an amazing read, an absolutely wonderful book and one of my all time favourites. It was made into a film with Steve McQueen which comes out pretty poor when compared to the book. Still, the book is a pretty thick volume and there is probably enough material in there for a TV series, never mind a film.

One part of the book which is pretty relevant to the lockdown is when Papillon is sent to solitary confinement. In case you don’t know anything about Papillon at all, he was a Frenchman convicted of murder and sent to a penal colony in French Guiana and after numerous escape attempts and many adventures, he finds freedom in Venezuela.

When Charrière is sent to solitary confinement he wonders how he will fill a chapter about a time when nothing at all happens to him, locked away for 24 hours a day with a rule of silence. Every day he is made to stick his head out of a small door in his cell so the warders can check to see if he is still alive. If he is, he is given food which has little nutrient. Luckily, Papillon’s friends have bribed the warders to give him some extra food including some fruit, or I think it might have been a coconut, which helped to sustain him. After many months someone new takes over the solitary block and he lets the prisoners out every day to socialise. This easing of the strict regime helps Papillon and his fellow inmates no end. I can imagine feeling similar when the lockdown is eased.

Just looking back at some of my old blogs for inspiration, I came across The Big 300, my 300th blog post and was surprised to find that this very post you are currently reading is my big 405! Still, I did start blogging way back in 2016 just as a way of promoting Floating in Space, my novel set in Manchester, 1977. You might possibly be thinking that this has been an excellent time to pen a sequel. If so, how wrong you are!

2 responses to “TV, Books and the Lockdown Blues”