A while back I wrote a post about my movie connections. Every time I see a great film it registers up there in the old grey matter and at some point I’ll take a closer look at the credits of those films and see if there was a connection. In the case of that particular post the connection was Terence Rattigan. Rattigan was a playwright who wrote many film scripts and adapted many of his own plays for the screen and in the course of my often extensive TV viewing I’ve come across a number of great films all written by him.

In another similar mental exercise, I examined another group of films and the common denominator turned out to be Nora Ephron. Now some of you out there may never have heard of Nora. Who was she anyway? Well Nora was a journalist, a screenwriter and a director. She’s probably most famous for penning the brilliant comedy When Harry met Sally. 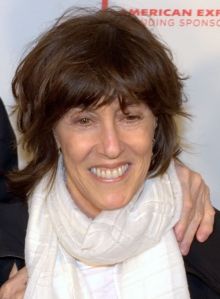 When Harry met Sally is one of my all time favourite films and one that I wasn’t keen on at first. It didn’t impress me that first time at the cinema, the second time I saw it on TV I thought, hey, this isn’t so bad and I made a particular effort to seek it out a third time. After that third viewing, I loved it so much I bought the DVD version.

I was sad to hear of Nora’s passing in 2012 and made a mental note to find out more about her. Naturally, being me, a lazy semi-retired English blogger and occasional maker of YouTube videos, I never did.

A few weeks ago and eight years after making that mental note I was scanning idly through the TV listings and noticed a documentary film about Nora called Everything is Copy. The writer and director, Jacob Bernstein turned out be Nora’s son so he was clearly qualified to make a documentary about his mother. It wasn’t the greatest documentary film I’ve ever seen but it was certainly interesting. The film told the story of Nora’s life through various interviews. One surprising one was with Carl Bernstein, the famous Washington Post reporter whose articles on Watergate with Bob Woodward revealed the Watergate scandal to the world and eventually forced President Nixon to resign.

Nora was married to Bernstein and after becoming pregnant for a second time with their other son Max, Nora discovered he was having an affair with Margaret Jay, a British journalist and friend. Nora used the experience to write a book called Heartburn which was later made into a film starring Jack Nicholson and Meryl Streep. I have to say I’ve not seen the film or read the book but once again I’ve made a mental post it note and stuck it firmly up there in my brain for further attention. 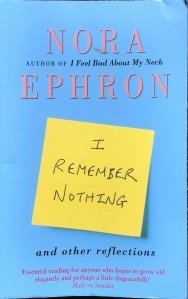 After watching the documentary film I felt even more determined to find out more about Nora so I went to abebooks on the internet and after some research ordered a copy of I Remember Nothing, a book by Nora that seemed to be a memoir. The book starts out as a sort of memoir, telling humorous stories about this and that, and her life without really giving much away. Nora wanted to be a journalist and after working for the Kennedy White House for a short while she joined the staff of the magazine Newsweek. In her book she tells the story of how Newsweek did not hire female writers and offered her a job as a mail girl. She doesn’t appear to have been upset by this despite it being blatantly sexist. She just got on with her job, still determined to be a journalist. In her book Nora makes the whole episode sound quite amusing, especially when she later writes a parody column during a newspaper strike and as a result gets invited to write for the New York Post. Over on Wikipedia, there is a slightly different story in which Ephron gets involved with a class action lawsuit filed against Newsweek for sexual discrimination.

I Remember Nothing is an amusing book although it’s a little short on copy for someone for whom everything is copy. I enjoyed it enormously although had I been reading it on holiday, I could have got through it in an afternoon by the pool. Even so, the book has some great stories, in particular I liked the one about when Nora was nearly an heiress and thought she was about to inherit a formidable sum of money. There is another one about Christmas dinner and the one about when a meal was named after her in a posh restaurant. All of the stories are nice blog post sized stories which if I were devious enough, I could easily steal for the days when I have no idea what to write about.

When Nora was married to Bernstein, she put together a screen version of All the President’s Men which was ultimately rejected (William Goldman eventually wrote the script) but her version was seen by someone else who offered her the chance to write the script for a television movie and that was how her screen career started.

There is one scene from When Harry met Sally that has become a classic. It’s the one where Harry and Sally are eating in what looks like a diner or cafe and Sally shows Harry how easy it is to fake an orgasm by demonstrating it there and then in the cafe. According to Wikipedia, the cafe was actually Katz’s Delicatessen at 205 East Houston street in Manhattan. Also, just while I’m in the mood for dishing out useless information, the lady in the film who says to the waiter, ‘I’ll have what she’s having‘ when Meg Ryan, who played Sally, had finishing orgasming was actually director Rob Reiner’s mother and the line was suggested by Billy Crystal who played Harry.

Personally, I’d be hard pushed to tell you my favourite scene in the film although the one where Harry tells his best friend about his divorce is a major contender. Harry says he only knew about the split when the moving men came to his house to shift his wife’s stuff. One of the movers wore a t-shirt with the legend ‘don’t f’**k with Mr Zero’ on his chest and Harry’s friend asks ‘are you saying Mr Zero knew you were getting divorced before you did?’

I thought the pairing of Meg Ryan and Billy Crystal was wonderful and I could never understand why the producers of films like You’ve Got Mail and Sleepless in Seattle paired Meg with Tom Hanks. Then again, Nora actually directed both those films so maybe she just preferred Tom Hanks.

Here’s one of the crazy things I love about movie connections. Ages ago, I caught a film on TV about a woman who wrote a cookery blog. Can you imagine that, a film, an actual motion picture about blogging? Who could do that, who could make a picture like that? I missed a few minutes at the beginning of the picture and made a mental note (yes, another one) to make sure to record it next time it was shown. No, I didn’t record it the next showing but to answer my last question, who would make a picture about blogging, the answer was, surprise surprise, Nora Ephron.

In 2009 she released Julie and Julia, a film based on an actual blog by Julie Powell, an American who decides to cook her way through the cookbook of Julia Child, a 1950’s American cook played by Meryl Streep. As Julie blogs about her cooking the film flashes back to the life of Julia. It’s a great film and the only film I can think of which focusses on blogging.

Nora died in 2012 from pneumonia, a complication of the leukaemia she was suffering from. She had not shared her illness with friends or family, thinking it might impede her career. However, in I Remember Nothing, she left a list of things she would miss when she had departed:

They include Spring, a walk in the park, reading in bed, the view out of the window, Paris, butter and taking a bath.